What fossils do we have?

County Durham is best known in scientific circles for its fossil fish that lived in the Zechstein Sea in Permian times. The fossils are found in the marl slate layers of the magnesian limestone area. There are specimens in many museum collections all over the world, and they can still occasionally be found today.

The magnesian limestone has other fossils, not as exciting as the fish, but far more numerous. They are the remains of marine invertebrate animals that lived on a reef in the same Zechstein Sea. They are mainly Sea Lilies (crinoids), corals (pictured left) and bryozoans.


The two best known fossils in the county are in neighbouring villages in Weardale, the Frosterley Marble around Frosterley and the fossil tree in Stanhope churchyard. The fossil tree is one of the earliest trees, a Sigillaria, from the carboniferous period 320 million years ago. It was found in a stone quarry near Edmundbyers Cross in 1915 and brought to the churchyard, where it is a prominent feature of the town centre.

There are other fossil trees, from more recent, post-glacial times, in the "Sunken Forest" off the coast of Hartlepool. The sea level rose after the last of the ice melted, drowning the forest. Tree stumps, branches, hazel nuts and leaves have been preserved there in a layer of peat. The forest is occasionally visible at very low tides, but is often hidden under layers of sand.

In 1997 a fossil tree was found in an open-cast coal mine at Great Lumley. Parts of this "Cordaites" tree are on display in the Durham Botanic Gardens and at Great Lumley Millenium Park. You can read the full story at www.cordaites.com

The Frosterley Marble is a dark grey limestone from the Carboniferous period, 325 million years ago. It has lots of fossils, mostly of a large solitary coral called Dibunophyllum bipartitum. There are also shell fragments, brachiopods, crinoids, algae, bryozoans, foraminifera and tree and leaf fragments. The fossils show up best when the rock is polished. It has been very popular as an architectural stone, particularly for churches. In 1350 AD it was used for some columns in Durham Cathedral, and since then it has also been used in- 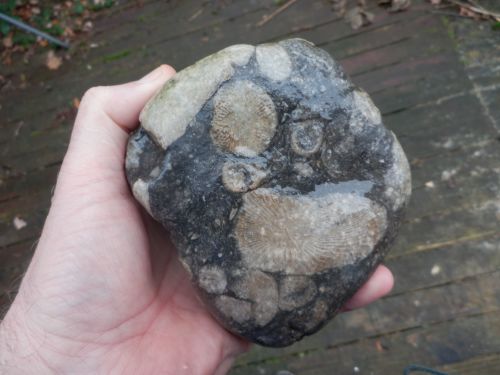 The coal measures have produced many fossils, found in the coal mines or in the waste rocks brought to the surface. Some of the waste from the coastal collieries was tipped into the sea, and can still be found along the shore. The fossils from the coal measures are mainly leaf impressions, tree bark and other parts of trees. The picture shows a 50 cm part of the trunk of a Lepidodendron, on the shore at Chourdon Bay. The "snakeskin" markings are where leaves grew out of the trunk.


Where can you find them?

There are no sites where it is easy to collect good fossils in County Durham. Accessible places where a careful search can produce fossil material, taking sensible precautions for your safety, are:-

The coastal cliffs are magnesian limestone, and some coal measures rocks have been dumped at the coast in our industrial past. A mixture of Permian and Carboniferous fossils can be found here, including crinoids, corals, bryozoans and parts of coal measures trees. Seaham Hall beach and Chourdon Bay can be worthwhile.The northernmost part of Chourdon Bay, at Noses Point, NZ438478, has a good selection of fossil plants in sandstone boulders, shown in the gallery below.  They are below the black "cliff" of coal waste in the centre of the picture. This is on the south side of Seaham, accessed from a cliff-top car park, map below. 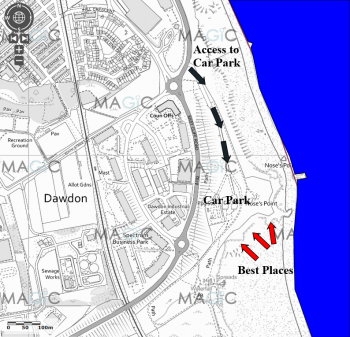 After the last ice age, sea level was much lower than it is nowand at obne period there were woodlands on land which is now under the sea along the North Sea coast. The remains of some of these were buried and preserved under sand and gravel when sea levels rose, and are still there under the sea.

From time to time, storms remove the sand and uncover the forests. Most recently, the one at Redcar beach has been visible. You can see tree stumps, fallen tree trunks, branches, roots and, with a careful search, leaf inpressions and acorns. If you know your tree species, you can identify oaks and birches by their bark.

These count as "sub-fossils", because they are "only" thousands of years old. 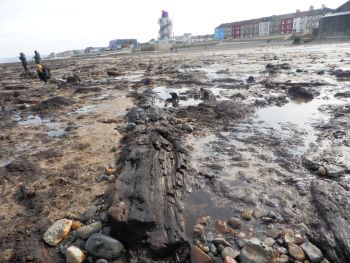 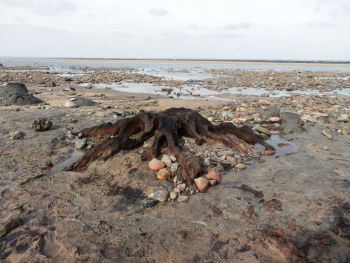 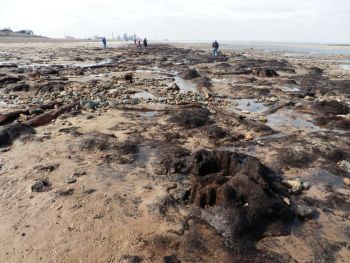 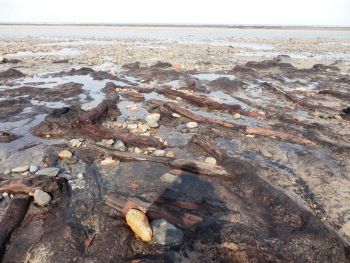 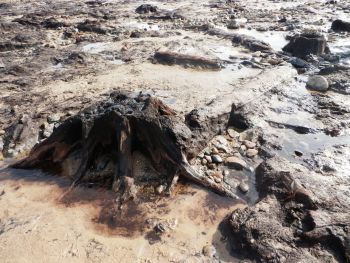 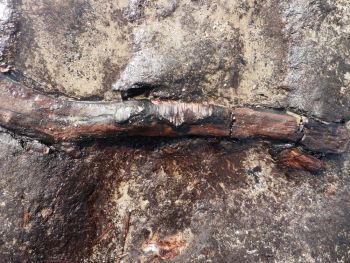 Gravel beds in the River Tees and the River Wear can produce lots of fragmentary fossils,

most easily found when the rivers are low but have recently been in flood. The Wear downstream of Wolsingham and the Tees at Winston and Whorlton can be good places to look. The group of fossils pictured are from Whorlton. Smaller streams with rocky beds can also be productive, especially if they are liable to spate floods. The Deepdale Beck, at Barnard Castle, is a good example of this. 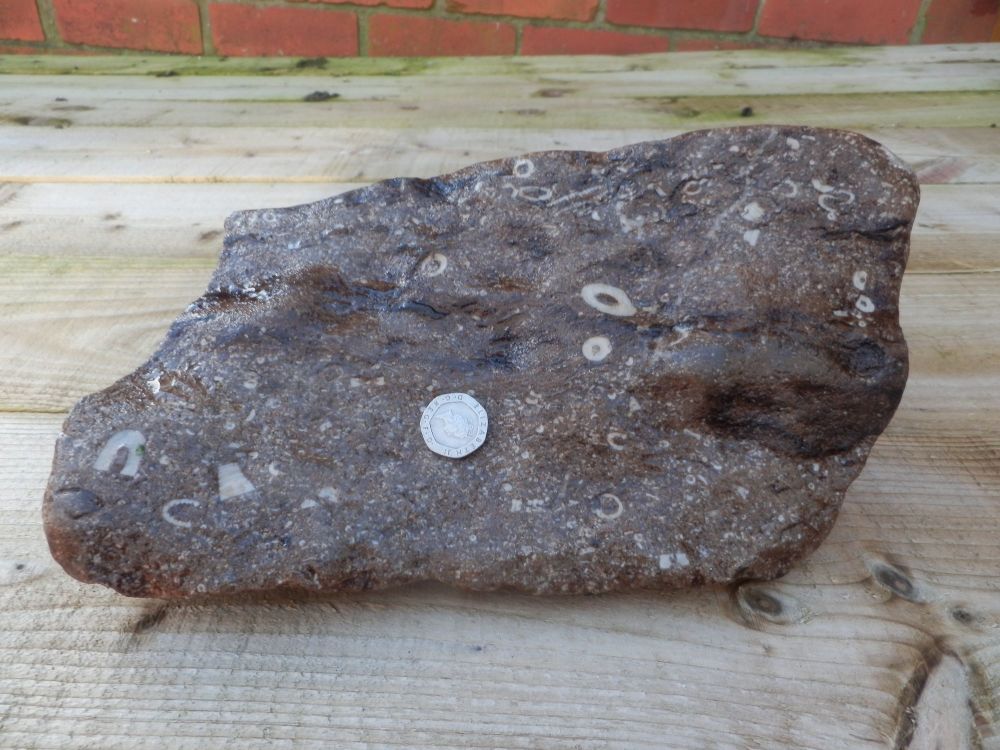 There are many websites about fossils. Two of the most useful are the Kentucky Geological Survey and Discovering Fossils.